You are here: Home1 / News2 / Encouraging a non-denominational Christian ethos

The Moderator of the Presbyterian Church in Ireland (PCI), Rt Rev Dr John Kirkpatrick, reaffirmed the denomination’s commitment to schools and encouraged the non-denominational Christian ethos of controlled schools, which, he said, ‘enables children and young people to flourish.’ 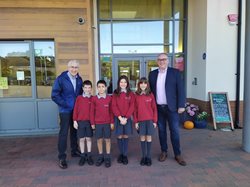 Dr Kirkpatrick was speaking after his weeklong tour of PCI’s Presbytery of Dromore. One of the church’s 19 regional presbyteries, it was the first of four such tours that he will make as Moderator, and included visits to three schools. The Presbytery contains 22 congregations and covers the central belt of County Down taking in Dromara, Drumbo, Moira, Royal Hillsborough, and Lisburn. Each tour is an opportunity to acknowledge and encourage the work of local congregations and the difference that they make in their local communities, while visiting a number of organisations supported by local churches. They also have a strong pastoral focus, giving the Moderator opportunities to spend time with local ministers and some of their families.

A strong civic and community element complements to each tour, and Dr Kirkpatrick’s schedule included lunch with the Mayor of Lisburn and Castlereagh City Council and a visit to the Air Ambulance Northern Ireland at Maze. He also saw the work of charities like Via Wings in Dromore and Christians Against Poverty in Lisburn, while hearing about the community outreach of Ballymacash FC on a visit to the club. 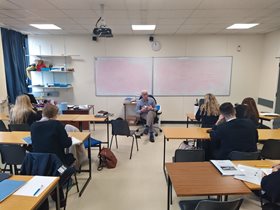 Throughout the week education played an important part of the tour, seeing Dr Kirkpatrick visit three schools in the Presbytery. At Wallace High School he spent time with Sixth Formers as they studied ethical world views, talking with them and answering questions. He also had an opportunity to meet members of the school’s Scripture Union. At Pond Park Primary School, Dr Kirkpatrick spoke during assembly, taking and answering questions afterwards from a class of P7s. He also spent time with senior staff and students on a visit to Dromore High School where he spoke at the Year 8 Assembly. 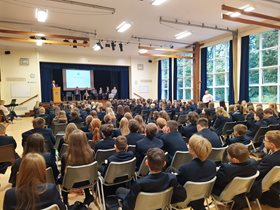 “Schools are integral to the life of families and local communities, and have also been through a lot in responding to, and dealing with the aftermath of the pandemic. It was important to take this opportunity to express our thanks to all those who contribute to school life, including teachers and governors, for all that they do,” Dr Kirkpatrick said.

“As they face multiple challenges it was also an opportunity to reaffirm PCI’s commitment to schools and encourage their non-denominational Christian ethos, which enables children and young people to flourish. I also wanted to listen, especially to the pupils themselves and I thoroughly enjoyed my interactions with them.”

The Moderator is pictured above on visits to the following schools:

Pond Park Primary, with some of the P7s and Rev Andrew Thompson, chair of the Board of Governors; Wallace High School, for a discussion with Sixth Formers; and Dromore High School, where he spoke at its Year 8 Assembly.